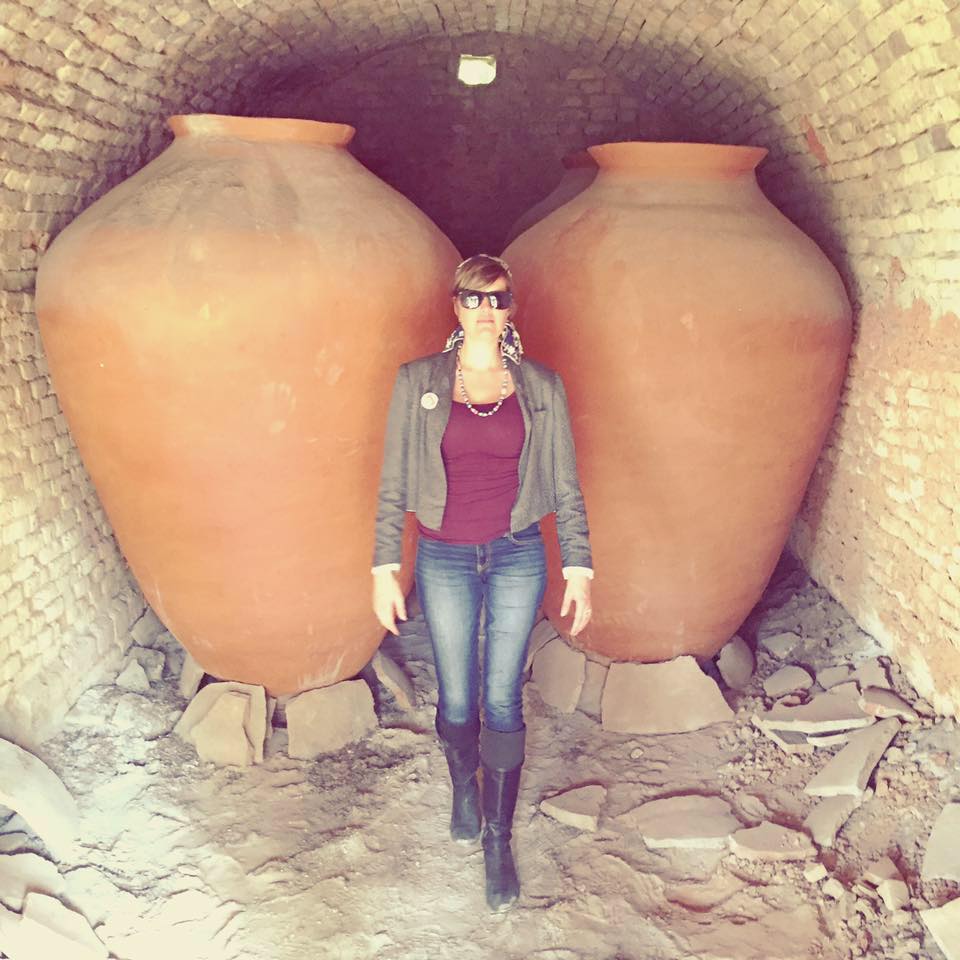 By Sarah May Grunwald

Considering the long hiatus I’ve taken from blogging here, I had to ask for advice from a writers’ group I’m in. Projects, life, art, work… they’ve all gotten in the way of writing about Georgia, and distractions aside I find it difficult to write about Georgia anyway because Georgia is so familiar to me, I make the assumption that it is familiar for everyone else. Illogical. My colleagues, Meg Houston Maker, and Robbin Gheesling suggested coming back to my blog and addressing the most common questions people ask me about Georgia. I thought about a Top 20, but I didn’t think questions such as, “They make wine in Georgia?” or “You mean, Georgia, as in Joseph Stalin?” merited an answer here. I thought about it for some time and realized that the personal questions I receive are the most relevant, because I have received the same five in some form time and time again during the past 3 years.

What brought you to Georgia in the first place?

The short answer is wine, but it’s a bit more complicated than that. My journey to Georgia started a couple of years before I ever step foot in the country, back in 2012. I was in a tasting group with four other Rome based sommeliers and we were becoming more and more interested in natural wine and emerging wine regions. I was a professor teaching wine at Instituto Lorenzo de Medici and one of my lectures was on the history of wine, which, of course spent significant amount of time on Georgia and the qvevri. By that time, I had only tasted Josko Gravner’s qvevri wine and started to become increasingly intrigued by the origin of wine.
One of my colleagues from the tasting group told us about the 2012 European Wine Blogger’s Conference in Izmir, Turkey which featured a press trip to Georgia. I eagerly signed up for the conference and tried to get on this trip, but unfortunately, I did not. Instead I ended up going to Cappadocia. We met fellow wine lovers and wine writers at the conference, which ended with a Grand Tasting of regional wines. The theme of the conference was “Source” and we tasted wines from the countries of Origin, including Turkish, Armenian, Georgian and Lebanese. I remember being captivated by the two Georgian wines we tasted. One was an “orange” and one was a red, both made in qvevri. I had completed my sommelier courses a few years prior and kept my palate up-to-date by joining tastings, having my own tasting group and attending trade shows. Those two Georgian wines, however, were not like any wines I’d had before. I thought to myself that I needed to develop a new wine vocabulary for such wines. I decided to make it a point to get to Georgia, and soon.
I made tentative plans with a friend that fell through for a variety of reasons. I was discouraged by other travelers’ tales of misogyny, sexism and food poisoning. By then my tasting group had evolved into a web portal on Rome’s food and drink scene. I was more comfortable as a writer.
In late 2013, I saw that the International Wine Tourism Conference would take place in Tbilisi, Georgia and they were accepting applications for the FAM trip and petitions for speakers. I sent in an application for the press trip, I was accepted and was also invited to speak at the conference. I was finally going to Georgia after two years of trying.
Within a few days in Georgia, I was completely seduced. It felt like falling in love. Really. And I have been dedicated to my beautiful Sakartvelo (Georgia) ever since.

The simplest and yet most difficult question- I’ve heard this one asked in a few different tones ranging from “Why the F**K Georgia?” to, “Georgia, wow, why?” On a spiritual level, coming to Georgia feels like a homecoming. I feel it is my spiritual homeland. The country and its people embraced me, including or in spite of my idiosyncrasies. I am a foreigner here and yet I feel like I make sense. When I came to Georgia the first time I was a really broken person on a lot of levels. I was in mourning, I’d lost faith in collaborative work, and the wine trade had become somewhat stale to me. Then I met Georgia, its songs, its pain and suffering, its joy, its tables, and its wine. Coming here reminded me of the first time I wore glasses. I was 30. For my entire life, I felt everything was out of reach, because it literally appeared that way. I saw the world in a sort of haze. When I had my glasses fitted and walked out the store I saw a tree, but I mean, I really saw this tree. It wasn’t just a brown trunk and green foliage, it had texture, shades of brown and green I’d never thought possible. I cried. I’d been missing so much in my denial of my eye problems. So it was with Georgia. From bland to technicolour. That was my spiritual journey.
As a wine professional with a decade of experience in in the food, wine and travel industry, it was immediately obvious that I needed to have a business here. I wanted to stay in touch. Within a week of being in Georgia I’d experienced the best hospitality I had ever experienced anywhere. From large factory wineries, small producers, hotels and restaurants and coffee shops, I felt welcome. In Georgia they say that a guest is a gift from God. This doesn’t mean the guest is treated as a god, only that a guest is honoured. I realized that Georgia had a system of hospitality built into the culture. Hospitality is tradition and I believe one of Georgia’s greatest assets. Founding Taste Georgia came naturally to me. I found people to work with, Irakli Cholobargia and Natia Khindasheli, two of the best people I have ever met in my life, Taste Georgia was born in July 2014, we had a website by January 2015 and at the end of that same month, we were already featured in the New York Times 52 Places to Visit in 2015.

What are the challenges of working in Georgia?

Creating a business in Georgia was a breeze. It is one of the easiest countries in the world to open a business in. I think in total, registering my company, opening a bank account and getting our VAT number took a total of 45 minutes. From that point of view, it has not been difficult.
However, there are challenges. There are still a LOT of infrastructure problems. Tbilisi is a very polluted city and the country itself is still identified as an Ex-Soviet country, and at a certain age demographic, there is a mentality my friend Daniel Khasidy coined as Soviet Stockholm Syndrome. These are challenges, which as a Westerner doing business here, I’m still learning to adjust to. Things can run at glacial speed, and even though everything seems to work out, when I am approaching deadlines, I have a high level of anxiety when it seems to roll off the backs of people around me.
The biggest challenge is Georgia itself. I have created a wine and food travel business in a country that has only recently been getting recognition as a travel destination for people from non-ex-Soviet countries within the past decade or so. Though I enjoy being a part of the education process as a writer and business owner and through wine education, it does create a lot of work for me that my business in Rome never did. Part of my job is to be a proselytizer of Georgia, Georgian wine and Georgian food. My profession by trade is wine education, and I find that the culture of wine in Georgia, and Georgian wine itself, are great ambassadors to the country. I have always believed that we meet culture and tradition at the table.
We don’t have a lot of competition right now. Georgia just hosted the first UN WTO Conference on Wine Tourism which we attended, and Georgia is predicted to be in the top 10 world destinations by the year 2020. I really enjoy being a part of this. I enjoy using social media as a platform for visibility and I also appreciate greatly having guests who feature us and Georgia in their articles. To date we have been featured in The New York Times, NPR, Lonely Planet, National Geographic Travel and dozens of food, wine and travel blogs.

What is your favourite Georgian wine?

This is a loaded question, and never asked by a wine lover. My gut response is to say, “It depends on what I am eating.”
I tend towards the wines of Imereti over Kakheti, though there are a few exceptions. I think this is because my palate is calibrated to Italian wines and the concept of wine and food always being together, so I like fresher wines with more food pairing options. Right now, based on the last two and a half years of tasting hundreds of Georgian wines, my favourite producers are Lagvinari, Gotsa Family Wines, Iago’s Wine, Mandili, Nika Bakhia and Ramaz Nikoladze.
The wine that seduced me was a 2013 Lagvinari Tsolikouri. Now a “unicorn” wine. I’ve written extensively about its maker, Eko Glonti. That wine felt like I was dancing with Baryshnikov when I’d been square dancing with hillbillies my entire life.
Right now, the wines that are exciting me the most are the 2015 wines from my friend Beka Gotsadze of Gotsa Family Wines. He is doing incredible work in the vineyard and cellar and his Pét Nats are just brilliant.

What are Georgia’s treasures?

I can carry on for days about the Caucasus Mountains, the 8000 years of unbroken wine culture, the qvevri and how wine is so intrinsically linked to the Georgian identity. Or perhaps I could write about the national Poem, A Knight in Panther’s Skin, which ripped my heart out and taught me the true meaning of friendship and love (and it is essential reading if you ever want to understand Georgia). Of course there is that unique language with its beautiful script, spoken only by Georgians and not related to any other language. Maybe the layers and layers of history, the Golden Fleece, Medea, the Argonauts, Queen Tamar. There are so many cultural and natural treasures in Georgia, but if I can be honest, the greatest treasure of Georgia is the Georgian people. I love them.